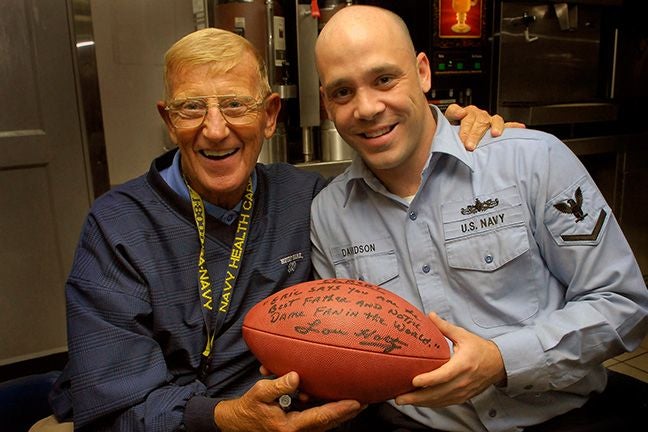 Lou Holtz has retained Morgan & Morgan’s Business Trial Group for a lawsuit against the Daily Beast alleging that the online publication damaged him by falsely reporting he disparaged immigrants during a 2016 speech.

Mr. Holtz is a Hall of Fame NCAA football coach and Orlando resident who currently derives the majority of his income from speaking engagements. He claims that his reputation and ability to derive income from speaking engagements were damaged by a Daily Beast article with the headline, “Lou Holtz at RNC Said Immigrants are Deadbeats Invading the US.”

The Business Trial Group has represented numerous high-profile clients on a contingency-fee basis and recovered millions of dollars on their behalf.  Regardless of your legal budget, if you are involved in a commercial dispute, the Business Trial Group can help.  Speak with an attorney during a free case evaluation.

Mr. Holtz, at the request of Phyllis Schlafly’s Eagle Trust Fund, spoke at the Republican National Convention in Cleveland, Ohio on July 19, 2016. The purpose of the speech, according to the Complaint, was to support the “small group of dedicated pro-life individuals gathered to fight for the lives of unborn babies.”

The Complaint, filed by the Business Trial Group’s Clay Townsend and Keith Mitnik, states that while the main thrust of the speech was Mr. Holtz’s personal opposition to abortion, Mr. Holtz also touched on a handful of other topics, including immigration.

The transcript from the speech shows that Mr. Holtz related an anecdote about how his immigrant grandparents from the Ukraine told him that he only need to learn how to speak English because he lived in the United States. Mr. Holtz then invited immigrants to come to the U.S. legally, like his grandparents did, and assimilate as they had.

Contrary to Mr. Holtz’s actual message on immigration, the Daily Beast published an article on July 19, 2016 with the headline “Lou Holtz at RNC Said Immigrants are Deadbeats Invading the U.S.”

The suit claims The Daily Beast took Holtz’s comments out of context and that he never used the word “deadbeats” to describe immigrants.

The lawsuit alleges the article was published with malicious intent.

“Defendants’ article juxtaposed a series of facts and false statements so as to create a defamatory implication and insinuated that Mr. Holtz’s speech was mean spirited and related to bashing immigrants,” states the Complaint. “This is not accurate.”

The Complaint also describes “additional offensive defamatory statements” about Mr. Holtz, including the article’s web address (“Lou-Holtz-Goes-On-Immigrant-Bashing-Rant”) and 20 references in the web page source code with references to the word “deadbeat.” These statements allegedly support “the malicious intent with which Defendants published the article.”

After the Daily Beast published the article, the Complaint says, numerous other news outlets with tens of thousands of readers republished, linked to, and quoted the original article, which further damaged Mr. Holtz’s reputation and business.

Are you the victim of defamation? Receive a free case review.

The Daily Beast removed the word “deadbeat” from the headline in October 2016 and added an explanatory paragraph that described the change and expressed “sincere regrets” for its error.

Nevertheless, the Complaint states the damaging headline remained accessible on the Internet for nearly three months, while the updated Daily Beast article continued to bear the headline “Holtz Goes on Immigrant-Bashing RNC Rant.” Notably, Betsy Woodruff, the article’s author, never publicly stated that she had mistakenly quoted Mr. Holtz. And many of the articles that republished, quoted, and linked to the Daily Beast article are still accessible online.

The lawsuit states that as a result of Defendant’s actions, Mr. Holtz suffered damages from the loss or cancellation of speeches, loss of speaking fees, damage to his business interests, as well as mental anguish and suffering and personal humiliation and distress. The Complaint brings causes of action for defamation, trade libel, and violation of Florida’s Deceptive and Unfair Trade Practices.

A common misperception is that contingency-fee litigation is only for individuals and businesses unable to afford hourly attorney fees. While the contingency-fee model does greatly benefit those unable to pay hourly rates, some of our biggest clients are those who can afford to pay large firms by the hour, but choose not to.

The Business Trial Group has successfully represented high-profile clients on a contingency basis.

Mr. Holtz joins a high-profile Business Trial Group client list that includes Catherine Zeta Jones, Michael Douglas, The Backstreet Boys, and the Harlem Globetrotters. Clients such as these eschew hourly billing in favor of a contingency-fee because they prefer a fee structure that aligns the success of the attorney and the client and ensures that they will only pay for results.

Whether you’re a small business or a big name, the Business Trial Group charges no up-front fees, and no fees at all unless we successfully resolve your claim. Learn more during a no-cost and no-obligation case review.